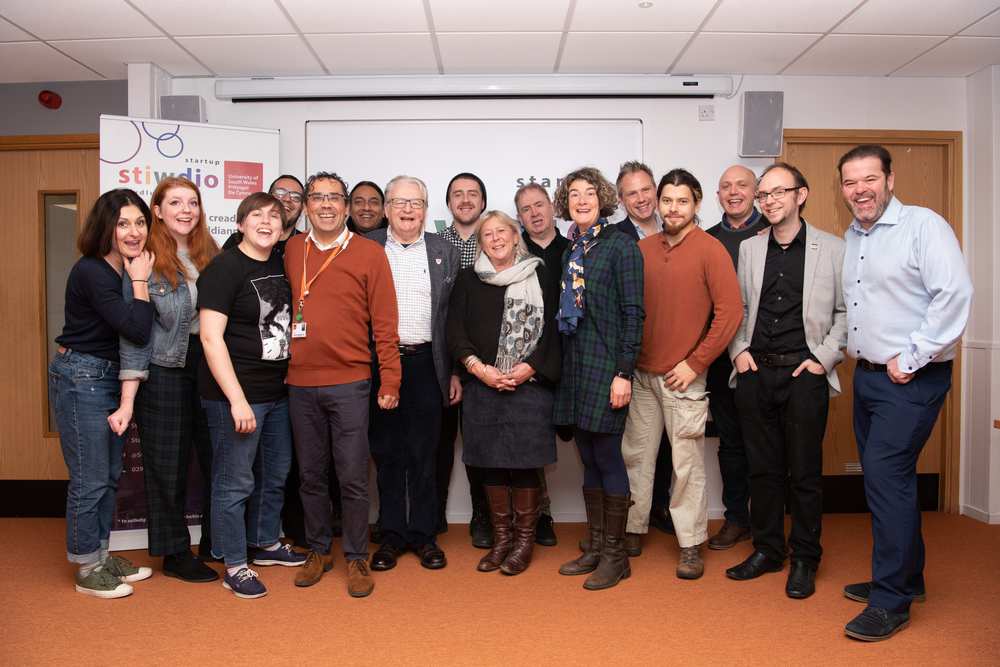 With small business struggling to keep afloat as the economy battles the impact of the coronavirus pandemic and subsequent lockdown, there has been continuing support for entrepreneurs based at the University of South Wales (USW) Startup Stiwdio.

Although the co-working space, on USW’s Cardiff Campus, had to close its doors, Incubator Manager Richie Turner and USW’s Student Enterprise Officer Jonny Jones have been directly assisting the business owners after most of them lost all their customers almost overnight.

As part of the support, entrepreneurs have been receiving daily emails from Stiwdio staff, highlighting potential emergency funding available through the Welsh Government, coming from such bodies as Creative Wales, BBC Wales, S4C, and the Arts Council of Wales. For example, Startup Stiwdio just hosted a webinar with Creative Wales explaining about their new emergency funding schemes.

Professor Dylan Jones-Evans, Assistant Pro-Vice Chancellor for Enterprise, has also been lobbying the UK and Welsh Governments to include startup companies and newly-registered freelancers within their financial support schemes.

In practical terms, a number of Stiwdio-based businesses have been supported in their efforts to remodel their products and services so they can continue to trade.​​​​​​​

After recently securing a grant from the Clwstwr programme – which supports Cardiff’s thriving screen sector - the business has quickly transformed its murder mystery teambuilding company, which usually runs group interactive performances, to selling downloadable ‘mini mysteries’ which families can play at home during the lockdown.

With charities losing millions of pounds in income, including from bucket collections, sponsorship, and charity shops, since the start of March, One Million Steps has started offering charities and their corporate business partners the chance to launch their very own Million Steps Fundraising Challenge. Companies can now join for free, meaning their staff are helped to stay physically and mentally healthy by encouraging them keep up their daily lockdown exercise walks, while at the same time raising money for the company’s designated charity.

A social good business that brings wellbeing and charity fundraising together under one platform and app, One Million Steps has developed the new product which has no onboarding costs, consultancy fees, or long-term contracts. The usual cost would be around £800.

The company has been helping the charity sector too, by designing an urgent pandemic appeal campaign for Hft, one of the largest UK charities which supports people with learning disabilities.

Talented animation and game design students from USW’s Faculty of Creative have been given an opportunity to working with Cooked Illustrations on ventures where their individual student projects intersect with the company mission. Cooked Illustrations has also changed its business, so is able to make best use of the some of the students’ 3D modelling skills on product development.

Website builder Ben, who joined Stiwdio in January, is offering to build or amend existing company websites so that entrepreneurs and existing businesses can sell their products and services online. Ben is not charging upfront fees, and is happy to wait until new sales start to come in before being paid for services.

Let’s Get There Productions.

The video production company usually runs a monthly film network – The Reelway - at Jacobs Market in Cardiff, but it has now moved the event online. The event has input from a number of local TV and filmmakers, many of whom are USW graduates, with those attending seeing showreels, discussing future projects, and possible recruitment opportunities.

The local TV station for the Cardiff region has continued broadcasting from the Stiwdio, with staff members Luke, Geri and Sam keeping the local public information broadcasts going, and also featuring several Stiwdio entrepreneurs working to keep their businesses afloat.

USW graduates Elliot Oakley and Victor Ojabo have just started their own business at Startup Stiwdio. Elliot is a musician, songwriter, and music promoter who has had to put his band’s tour on hold, but is still finding ways to perform online, including raising money for charity.

Victor, who has just secured a Startup Visa sponsored by USW, saw his new company NDT Wales Ltd registered with Companies House earlier this month, with help from the Stiwdio’s legal partner Capital Law. Victor has created his own testing company, with support from USW’s Engineering School, and is actively working on his revised marketing strategy with help from the Startup Stiwdio. ​​​​​​​

For more information about the Startup Stiwdio or any of the entrepreneurs featured, contact  [email protected]

Supporting our enterprising graduates of 2020

Win up to 6 months free membership to kick-start that creative idea into a successful business!

USW sets up incubator in Cardiff to support graduate entrepreneurs