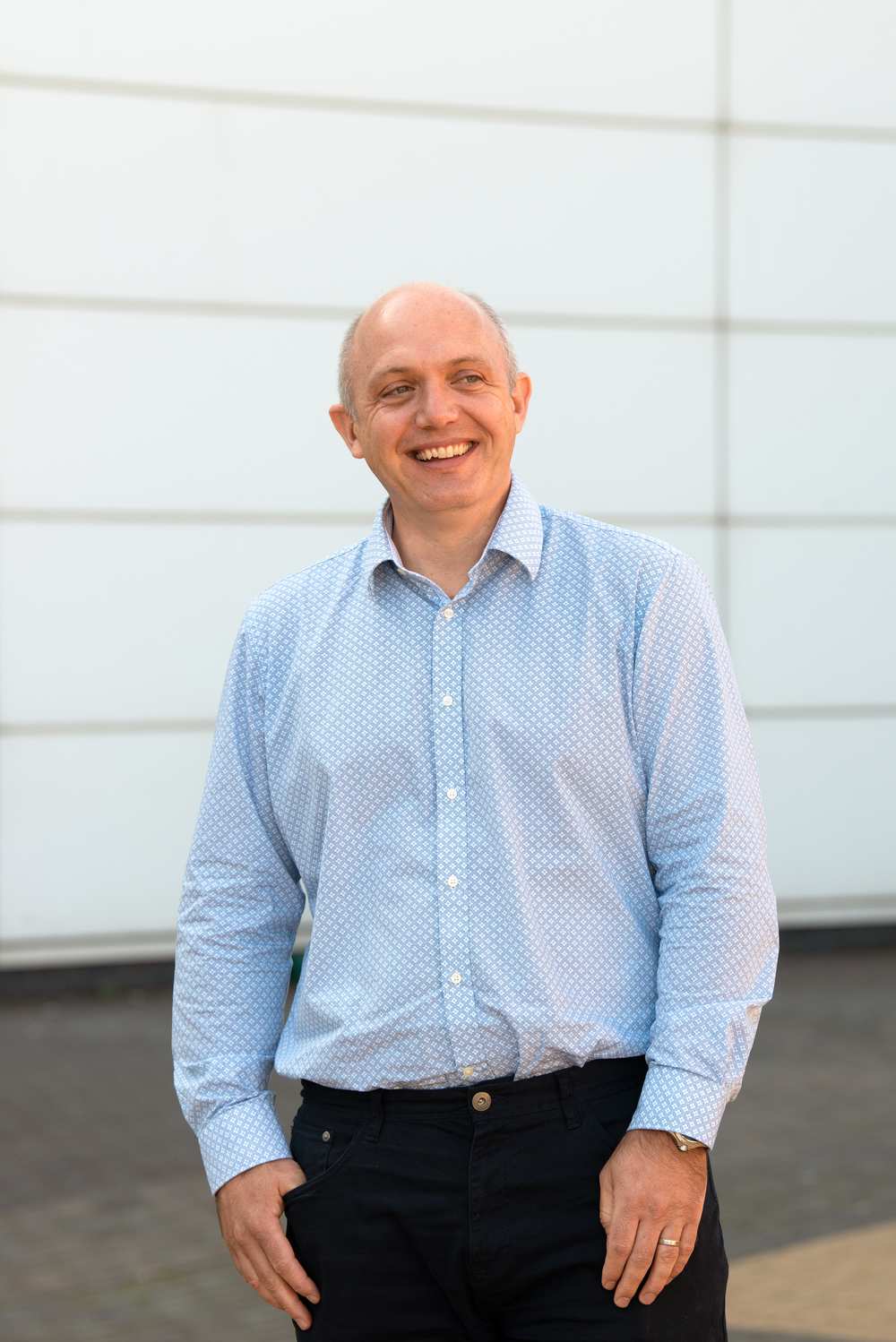 Graham Morrison had looked at working from a number of co-working spaces around South Wales to take his business to another level, but found they didn’t meet his needs as an entrepreneur.

So when he asked at the University of South Wales (USW) about the help that may have been available to develop his business, he was delighted to hear that Startup Stiwdio was being established.

That was late last year, and led to him being the first tenant of the new facility. It’s a move he is glad he made.

Graham, 46, who lives in Cardiff, is a graduate in Computer Science of USW’s predecessor institution, the University of Glamorgan. He spent many of the intervening years working as a contractor in the computer business.

Having seen a gap in the market, he established COADE 3 – a business which specialises in supporting large corporations with what can be a challenging problem.

“Many businesses have staff intranets, but the search functions on them can be less than perfect,” he explained. “COADE3’s aim has been to make this better.

“Basically I’ve developed a specialist search function for internal comms that works in a much better way. It reads and understands English in a way that wasn’t previously possible, so when looking for specific documents – of which an intranet could have many thousands – it’s got the intelligence to do it more thoroughly.”

A specialist in ‘tech’ and offering a product that is in high demand, Graham has some strong skills. But what he admits he lacked was the business nous and support to take his enterprise to the next level.

That’s where Startup Stiwdio has come into its own.

“When I looked around at the other co-working spaces, I didn’t find the specific expertise that I needed, and there wasn’t the atmosphere that was suitable for me,” he explained.

“However, as soon as I met Richie Turner – who’s Community Manager at Startup Stiwdio – I knew it was for me.

“Richie explained that concept, and also that he had been involved in running businesses himself, and I was sold on the idea, and being involved with it. That real-world experience that Richie could call on was vital to me.”

The specialist support on offer at Startup Stiwdio is also a key benefit for Graham.

“What’s different at Stiwdio is the fact that it’s part of USW,” he said.

“In other places I have been based, there has been a network of small businesses working together, but that never seemed to benefit me, or be linked to bigger businesses.

“What I am finding with Startup Stiwdio is the name of USW opens doors, it gets other big businesses involved, some major names, and has people available who can do what I can’t with my business – finance and business planning for starters.

“That’s what I need. I have plans to make my business grow and employ people, and that will only be possible with the sort of support I am getting here. I’m just really glad that I’m part of it from the outset.”

Supporting our enterprising graduates of 2020

Win up to 6 months free membership to kick-start that creative idea into a successful business!

USW sets up incubator in Cardiff to support graduate entrepreneurs